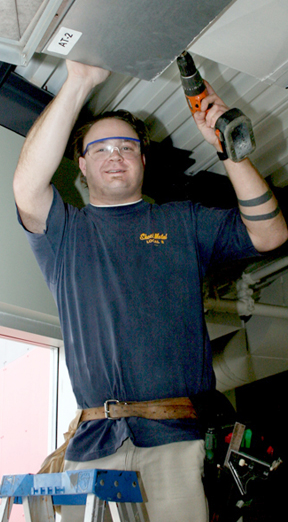 An accident and chance led to 32-year-old Lee Hill of Six Nations, embarking on a career as a sheet metal worker. Hill started out his trades career in ironwork, working alongside his dad but eventually felt the tug to strike out on his own. "I figured I had to get out and see the rest of Canada," he says.

Hill decided to pursue employment in Alberta and settled in Edmonton working various jobs unrelated to construction. Finally, he found a position working as a laborer in a sheet metal shop, cleaning and loading trucks.

However, tragedy struck when Hill suffered an accident while out mountain biking. "I got hit by a truck. I was laid up for three months with a broken collar bone so with all that spare time I figured I might as well sign up for an apprenticeship," he explains.

With the help of his employer and support from Grand River Employment and Training, Hill turned an unfortunate event into an opportunity and began training as a sheet metal worker apprentice.

Like most trades, Hill says he likes the hands-on aspect of the work. In the shop he receives orders on drawings which he must then recreate in metal.

"I do a flat pattern of whatever I have to make and then cut it out and weld it or rivet it, there's bending involved or rolling if it is a circular object," he says.

Unexpectedly though, he's discovered an interest in the science behind Heating, Ventilating, and Air Conditioning, commonly called HVAC. "I'm kind of interested in the way that air moves and things like that and with ironworking experience and welding experience, I didn't do too bad in the shop either," he says.

Sheet metal work is a versatile trade that can take you into many different industries. They are found in shops, on construction sites and in custom stainless shops building everything from air conditioning ducts to restaurant and hospital equipment. Through the shop in Edmonton, Hill worked mostly on sheet metal products for heating and air conditioning systems, including on site installation.

"That was the main thing that I was in but I had about two or three years in a sheet metal shop and I worked in a custom stainless shop for about three months and then the rest of it was mainly installation of heating and air conditioning," explains Hill.

For those looking for a trade with a bit of a daring side, sheet metal work can take you to surprising places. Hill found himself 120 feet in the air installing oversized duct work at a sulfur extraction plant in Fort McMurray.

"There was a lot of crane work and the size of the air handling units were the size of a house pretty much. Each piece of the duct that we were putting up was probably close to 800 lbs per piece," explains Hill. With experience in Ironwork, Hill says, "The height thing doesn't bug me. It's kind of in my blood."

Hill is home now on Six Nations where there are plenty of opportunities in the surrounding areas. After eight years as a sheet metal worker, Hill encourages others to follow his lead and look into the trades as a career.

"The industry right now is really hurting for people to take on trades. There is a huge gap. There are lots of people in the 20 to 30 year old age range then there's a good 20 year gap and you're looking at 50 to 60 year olds," he says. For the most part he says, "It's a good trade to be in. There are a lot of places to go. It takes discipline, being there, getting up, and going every day. Even people who have great jobs, have bad days."