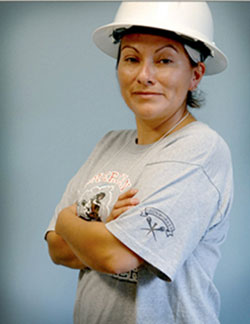 Stereotypes in the workplace are being broken everyday with women assuming more and more powerful roles, showing they've got what it takes to work alongside men.

"A lot of them think you can't do it but once they see that you are there to do your job and you are there to put in a days work they have a greater respect for you for just getting in there and doing your part too," explains 33 year old Jenelle.

What began eight years ago as a way of making a living to support two young children has become a lifetime passion sending her to various locations across Ontario.

"I was supporting two kids on my own so I needed an option where I could work if I wanted and take time off if I needed to and had a high paying wage."

With a father already in ironwork, Jenelle thought she had a feel for the trade but says she never really understood what it was all about until she was immersed in it.

"Every job is different, nothing is ever the same. No two days are the same," says Jenelle.

"It's hands-on. You operate the tools, you operate the torch it's all mechanical stuff, the mechanics of how things work, you see how they're put together, how to repair it, how to build something new and make it look like the old piece."

Since 2002 Jenelle has worked in the industry for companies like Dofasco, Stelco, Toyota in Woodstock and Cambridge, the Inco mine in Sudbury, and Chrysler in Sudbury and Windsor.

While on some jobs she is building the main structure of a building or reinforcing cement work, others like Toyota involve changing production lines as they switch from one model to the next.

"My kids are very supportive of everything. They understand when I can't be there and enjoy the times when I can be there," says Jenelle.

While she loves her work she admits she doesn't like when jobs take her away from her children for extended periods of time.

Luckily, she has a sturdy support system through her mother and father as well as other female ironworkers. With only 10 female ironworkers in her union she says it's rare to run into another woman on site but they keep in touch with text messaging.

"A lot of the female ironworkers encourage each to going and we compare jobs and stuff like that. Kind of along the same lines as guys and how they have their buddies," says Jenelle.