"I guess it just came natural to me, the welding," says 27-year-old Travis Fraser from Six Nations of the Grand River territory. "It's something that's interested me for a while. I messed around with a welder in the backyard with the demo vehicles, putting them together and stuff like that, just tinkering around." 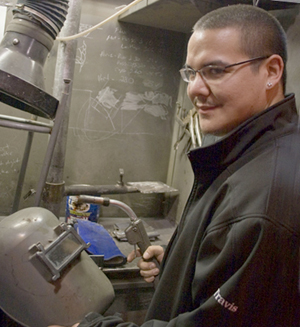 Travis was one of the first to go through Ogwehoweh Skills and Trades Training Centre's (OSTTC) pre-apprenticeship training course. At the time, he was interested in entering a trades career as an automotive apprentice. Six years later, he's still in the trades but enthralled in the art of welding through OSTTC's welding training course.

"I didn't really think there was that much thought into the welding itself but it's so particular on how you hold the rod, on how you bring it with you, you have to watch almost everything you're doing", he says.

Welding is all about the numbers he says, "If you don't have your numbers high enough, the weld is just going to sit on there and you can hit it off. If you have them too high, you can burn straight through the metal. So again, a steady hand comes into play, quick or slow depending on how much power you've got running through it."

During his eight week training course Travis learned the ins and outs of welding, including experiencing the more dangerous side of the trade. Welders wear protective clothing to prevent burns from sparks and slag, globules of molten metal that are expelled from the joint.

However, in certain positions, such as welding overhead, slag can fall on clothing with the potential to burn. "The last incident I had my pants almost caught on fire. I was sitting there welding and then all of a sudden I could smell something,"laughs Travis. With burn marks on his boots and jacket, he chalks up the burns on his pants to just another learning lesson. "Those jackets are meant to take the fire. They can just have everything bounce off them but if something stays on it then it's going to burn right though," he says.

"Welding isn't for everyone," says Travis, "there are some people that just can't get it no matter how many times they try. It is pretty much an art, you've got to be really precise and you have to have a steady hand."

As his first experience with welding, Travis is turning out to have an unknown talent. "Rick [his instructor] pointed out that I have a natural knack for it. He says, 'You've got it, you just need to go through with it'," he says. "I'd like to get into an apprenticeship, it's very interesting and I know that welding can take me almost anywhere across the world," he says. Someday he hopes to get a position in the northern diamond mines, which require welders for maintenance on their vehicles and equipment.

In the meantime, Travis is waiting to get into the second level of OSTTC's welding course before seeking out an employer sponsor for apprenticeship. "My spouse she's like, 'Go for it, if your teachers told you that then keep going'," he says.