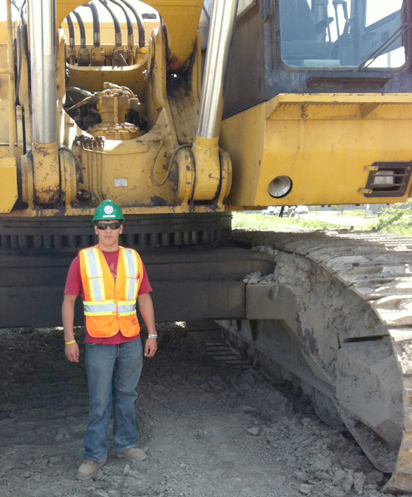 As a kid, Jordan Wright saw for himself the power of machines.

Started out working on a local farm

Working alongside his father on a local farm, riding plows and tractors was second nature.

Now this 19-year-old Ohsweken, Ontario native is turning his childhood memories into valuable experience for a career as an heavy equipment operator.

“We went through just the basic controls of it and the safety of each piece of equipment and what you should and shouldn’t do at a certain time,” says Wright. With his background, the mechanics came naturally and Wright scored in the top of his class with a 92 per cent final grade. “They told me that I’d go pretty far in this trade if I follow through with it,” says Wright.

With the help of employment counselor, Brandi Jonathon at Grand River Employment and Training, Wright’s farm experience and high marks have landed him an opportunity to gain work placement experience through AECON, one of the leading construction and infrastructure development companies in Canada.

“They’re pretty much the biggest company infrastructure wise across Canada. They’ve worked on a couple of big jobs worth a few million dollars so they’re pretty big,” he says.

With Morrisburg being five hours away, it was Wright’s first taste of life away from home. “I’ve always gone places alone but I’d always known someone once I got there so this is a whole different atmosphere with people I don’t know and meeting new people,” he says.

But after one taste Wright is ready for the whole pie and looking forward to taking his skills across Canada.

“It’s a whole different atmosphere being in one spot one day and another spot the other day, that’s pretty cool,” he says. AECON has sites in Sudbury, Sault Ste. Marie, Edmonton and Breslau where he is currently gaining valuable work experience.

He’s soaking up tips of the trade from journey persons willing to take him under their wing. “I’m always coming across new stories, new people, and what they have to offer, all the little tricks they can tell me. So every day I pretty much get to know someone new or get to know someone a little better,” he says.