The wigwam, snow house and longhouse were highly evolved building-forms; they were designed to perfectly suit their environments.

The people of Canada's First Nations developed rich building traditions thousands of years before the arrival of the first Europeans.

Canada contained five broad cultural regions, defined by common climatic, geographical and ecological characteristics. Each region gave rise to distinctive building forms which reflected these conditions, as well as the available building materials, means of livelihood, and social and spiritual values of the resident peoples. 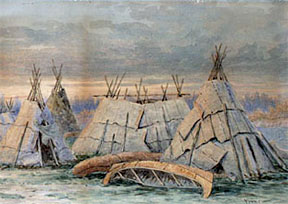 A striking feature of all First Nations architecture was the consistent integrity between structural forms and cultural values. The wigwam, tipi and snow house (see Igloo) were highly evolved building-forms perfectly suited to their environments and to the requirements of mobile hunting and gathering cultures. The longhouse, pit house and plank house were diverse responses to the need for more permanent building forms.

In addition to meeting the primary need for shelter, structures functioned as integral expressions of their occupants' spiritual beliefs and cultural values. In all five regions, dwellings performed dual roles - providing both shelter and a tangible means of linking mankind with the universe. Building-forms were often seen as metaphorical models of the cosmos, and as such they frequently assumed powerful spiritual qualities which helped define the cultural identity of a people over hundreds or even thousands of years.